It’s been a while since I posted, but this month has been crazy!  On March 4th, I got a new brudder!  His name is Buster, and he is a 5 year old Golden Retriever.  Momma has been asking for another dog since January because she knew I was lonely, and finally Daddy said okay!  So, Momma jumped on her ‘puter and went so some website called petfinder and found us Buster.  He’s a little on the chubby side at 95 pounds, but Momma says we will whip him into shape in no time.  All I know is, I am not lonely anymore.  We play outside all the time, and he wears me out!  I can still out run him though.  He can only keep up with me for 2 laps around the yard.  But when we wrestle, I end up having to lay on the ground because I get tired!  Chili Dawg used to lay on the ground when we would wrestle, and now I understand why.

Momma calls Buster, “Thumper”, because he has a very loud tail.  As soon as Buster hears you coming, he thumps his tail on the floor and it’s really really loud.  He’s good with the little kids too.  He lets Noah play pretend vet with him.  Noah has a doctor kit and he lets Noah try to listen to his heart, and put a blood pressure cuff on him, and check his ears.  I don’t like doing that stuff, so it’s good that we have Buster now.  He’s still kind of naughty though.  Today was the first day Mom and Dad forgot to put the baby gate up, and Buster destroyed the comforter on their bed.  I told him to stop chewing it, but he didn’t listen.

Momma says I’m smarter than Buster.  We have been having warm weather, and we NEVER have warm weather in March.  So Mom and Dad have the screen door open on the patio door.  I only run into it the very first time it’s open, and then I remember that it’s there.  Buster runs into it every single time he goes out.  I was never as smart as Chili Dawg, but finally I’m smarter than my new brudder.  I think Chili Dawg sent him to us, because Momma had been looking on petfinder for Golden Retrievers and they are hard to find- all of the golden retriever rescue places around us won’t let you rescue a golden if you have kids under the age of 5, so when Momma found Buster and he wasn’t at a golden retriever rescue, it was a sign. 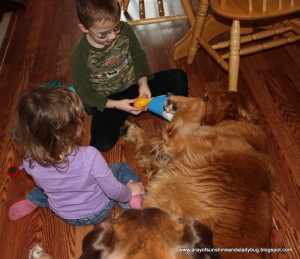 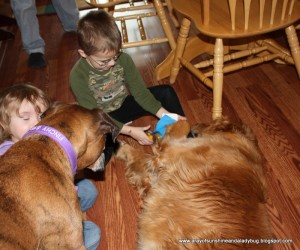 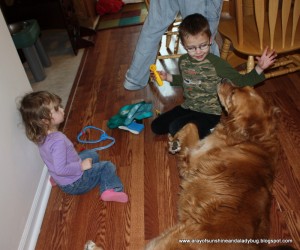 2 thoughts on “My New Brudder…”