Yesterday, Buster & I got to meet some new friends!  We met at the dog park in Plainfield.  We got to meet: Spirit Tripawd Tate’s little sister Sam and her baby brother Zeke, Tripawd Holly and Zuzu, and Tripawd Queen Ginger.  We got to meet their pawrents too, and they are all soooooo very nice!  Noah and Juli came along too and they had a lot of fun running with the dogs and giving treats out.

Sam and Zuzu are very fast, but I was able to keep up with them for the most part.  It was nice to run with dogs that are as fast as me.  Buster can’t keep up with me at home so he just stops in the yard and waits to cut me off.  Towards the end of our visit, I got hot, so I laid down near Ginger.  She reminded me of Chili Dawg, which was very nice.

Noah’s favorite parts of the day included: 1) meeting Ginger- because she looked like Chili Dawg (his exact words), 2) seeing the 2 very fast dogs run (Sam and Zuzu), & 3) collecting pine cones (he turns them into bird feeders- thanks Special Agent Oso & the Disney Channel).  Juli’s favorite part of the day: “lots of puppies!”  Juli often found herself in the “sea of dogs” and would get knocked down.  Where some kids might have cried, Juli was always laughing and yelling, “more again!” wanting them to knock her over and give kisses again.

At the end of our visit, I did get cranky when a bunch of new dogs showed up and started sniffing at me.  Then Mom had to drag me to the van, while Aunt Jan stayed with Juli who was crying because Mom left the dog park.  I didn’t mean to get cranky, I was just hot and I didn’t want to be sniffed anymore especially by a bunch of new dogs that just showed up to our pawty.  Buster and I were pretty tired for the rest of the day, and Juli took a really long nap.  It was such a fun time!

Here are a few pictures from our day : 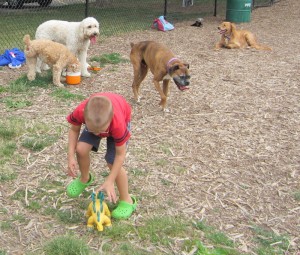 4 thoughts on “Tripawd Get Together…”