This week, one of my students said to me, “You probably don’t have anything that you’re thankful for right now, huh?  I mean since you had to put “Be Positive” to sleep and they don’t know what’s wrong with your daughter.”  I think I surprised him when I came back with, “Actually, I have lots of things that I am thankful for.  I am thankful that I got to have a few extra months with “Be Positive” (if you’re confused on why Chili Dawg is called that, see this post).  Even though it was no where near enough time with him, I still got extra time.  I am thankful that my daughter is doing okay.  She even looks healthy this year, which is a big step!”  My student then said, “Oh,” and walked away.  Teenagers, you gotta love them 🙂  I also wanted to mention that I am VERY thankful for this website and the friendships I have made.  I am VERY thankful for all of the wonderful support and encouragement that I have received.  If I had had to go through all of this alone, I think I would be in a very dark place right now.

We are closing in on three months since Chili Dawg crossed the bridge.  I’d like to say it’s getting easier, but it’s about the same for me.  He loved the cooler weather that fall brings, so he would have loved the weather right now.  Last night when I got home from my MRI, Ryan was editing video for the Christmas video we send to our families, and he was on a clip of the Chili Dawg running as a tripawd in the backyard.  It brought a smile to my face, followed by tears, because I shot the video about 2 weeks before his cancer returned.

Noah keeps talking about Chili Dawg, and for Halloween, I bought both kids white shirts/sweatshirts to wear under their costumes- you never know what the temperature is going to be.  We had some iron-on sheets, so when I had some alone time, I printed out pictures of both dogs and paw prints and made the kids t-shirts.  I also borrowed Charon’s quote, “Love never ends” for the ones with Chili Dawg on it.  Juliana got both a t-shirt and a sweatshirt (not because I love her more, but because I haven’t been able to find a white sweatshirt in Noah’s size yet, but he will get one eventually).  I think they turned out okay for my first attempt.  Both kids were really excited to wear them, and Noah noticed right away that his shirt with Chili on it only had 3 paw prints on the sleeve. 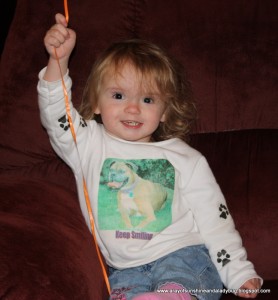 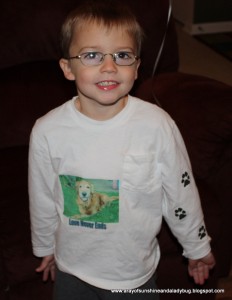