So, one of the reasons I love the Chili Dawg is because he is my “soul”dog.  My 2 year old daughter is in Early Intervention.  Today her speech therapist, Laura, told us that she was leaving the company and would no longer be doing Early Intervention.  Laura has been with us for a long time and is practically a family member.   She has brought my daughter a long way.  My daughter doesn’t like to eat, but now Laura has her eating age appropriate foods and has her weight up to 22 pounds.  She also has my daughter saying about 15 words, which is wonderful.  After Laura told me the news that we only had 4 weeks left with her, I went upstairs to my room and sat down.  Chili Dawg immediately found me and put his head in my lap while I cried.  He became my crying blanket for as long as I needed him.  Finchy, on the other hand, thought that it was a good time to try to get Chili to wrestle with him (ahh, monkey butt dogs).

I wrestled the laptop away from my tripawd brother, Chili Dawg, to check out why he’s always typing on it.  I love my brother, a lot, and I have been worried about him the last few months.  Mom and Dad got me a year after they got Chili Dawg because they could tell that he needed a friend.  Chili and I are 6 months apart in age and we have been inseparable in the seven years we have been together.

A few months ago, Chili stopped wanting to wrestle with me and he started to limp.  Dad took him to the vet a couple times and then Mom did a lot of crying, so I knew it wasn’t good.  Then, one day Dad took Chili away with him and Chili didn’t come back that night.  I waited at the door and waited.  Mom finally made me come upstairs at bedtime.  They kept telling me that Chili would be coming home the next day.  The next night, Dad brought Chili home, but he was different.  He was missing a leg.  Part of me wondered what he did wrong, because he’s their favorite, so what’s going to happen to me?!?  Mom assured me that nothing is going to happen to me, and that she doesn’t have favorites.  The first night, Chili slept downstairs because he couldn’t do stairs.  I insisted on sleeping down by him too, and Mom ended up sleeping downstairs with us as well.

It’s taken a little while, but Chili is getting back to his old self.  He runs in the back yard with me now.  He’s not as quick as he used to be, but he still gives it his best.  He even wrestles with me now, although he spends more time on his back then he used to when we would wrestle.  I still worry about him, and Mom says I’ve gone gray pretty quick in the past few months.  But he’s my brother and always will be.

Chili Dawg here.  My pawrents returned from vacation and I was happy to see them, especially my mom.  My brother and I greeted them at the door and I was so happy to see my mom, I pushed Noah (sorry, Noah) aside with my head and ran through the garage to my mom.  I think she still feels bad for leaving us because every night she lays on the floor with me before bedtime, but I was fine.  She got us a great dog sitter who kept mom and dad posted with pictures of us. 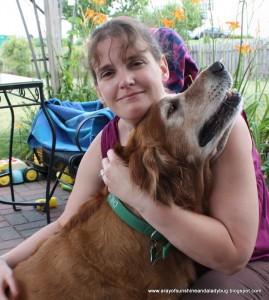 Chili Dawg here, mom let me use her laptop again.  Before I became a tripawd, my pawrents bought plane tickets to visit my dad’s family in Arizona.  My mom asked one of her former students to house sit so that Finch and I didn’t have to go to the kennel.  Finch and I were excited because we would get the house to ourselves (I called the bed!).  Plus, we always get extra treats whenever Lee Anne babysits the kids, and since the kids would also be gone we figured we’d cash in on even MORE treats (awwww, yeah!).

Well, ever since the vet said the cancer word and I became a tripawd, Mom and Dad are having second thoughts about leaving me and Finch.  I want them to go and have fun- they don’t get to see these pawrents very often.  I think Mom is having bad dreams about leaving me, because in the middle of the night she gets up and lays on the floor with me.  Don’t get me wrong, I enjoy the extra snuggles, but I don’t want my mom to feel bad for leaving me, I feel much better as a tripawd.

AHHHH Chili Dawg, last time I let you “paw-jack” my laptop and spill my secrets!  It’s not that I’m afraid to leave the Chili Dawg.  It’s just that I don’t know how much time I have left with him.  He’s doing well right now, and for that I am grateful.  I just wish I could shake the bad dreams.  Any suggestions?

I just finished reading the book, “Blind Hope: An Unwanted Dog & the Woman She Rescued,” and there was a quote in the book that I wanted to share with my fellow tripawds and their owners:

“Love is a bridge that stands firm through difficulties and connects one heart directly to another, not because of how it looks, but because of what it is.”

How true that is, eh?

Chili Dawg here, my mom is letting me use her laptop to write this.  So this weekend, my pawrents and aunt and uncle did this weird race called the Warrior Dash.  My grand-pawrents came down to watch Noah and Juliana, and they brought their monkeybutt dog, Sarge with.  Normally, Sarge bothers me the whole time, but apparently now that I’m a tripawd he just knows to leave me alone and instead bothered my monkeybutt brother, Finch the whole time.

Anyway, my pawrents and aunt and uncle left to do this Warrior Dash.  I have no idea what that is.  All I know is that they left the house clean and when they came home, they were caked in mud and had these weird hats with horns on them.  After my mom got clean, she laid on the floor with me and told me that when she fell going up one of the muddy hills it hurt her really bad, but she picked herself up out of the mud and scrambled up the hill because she thought of me and how I didn’t show any pain when my leg hurt.  I thought that was pretty cool.

After both my mom and dad got cleaned up (it took a while- I’ll show you a picture of them all muddy) we tried to take a family picture.  I tried to cooperate, but Finchy wouldn’t stop wiggling around and he got me all riled up and all I wanted to do was lay on my side.  Oh well, I guess Mom will have to try again another day.

My son, Noah, has a very kind heart.  The day Chili Dawg came home as a tripawd, Noah waited for us to get Chili to his dog bed and then immediately sat down next to him and stroked his head.  Every day we left the house to go somewhere, Noah made sure he gave Chili a kiss on the head and told him to, “feel better”.

Now that I’m on summer break, we have been able to move at our own pace during the day and the kids and dogs have had plenty of time to play outside together.  The Chili Dawg has enjoyed “being beautiful” outside, basking in the sunshine next to his brother Finch.

The other day, Noah said to me, “Mom, we’re going to need lots of water and dirt.”  I was a bit confused, so I asked, “For what?”  “For when it’s time to grow Chili Dawg’s leg back. At school my teacher said we need the sun, dirt, and water to make things grow.”  “Sunshine (that’s Noah’s nickname), Chili’s leg isn’t going to grow back.”  “Why?”  Oh boy, how do I explain this one, I thought to myself.  “Because Chili’s leg was hurting him, so we had to have it taken off and it isn’t able to grow back.  But it’s okay, because Chili doesn’t need to have four legs to do everything that he used to do, right?”  “Right, Momma.”

Two milestones happened this week: 1) my two year old daughter had to have the tooth she knocked loose pulled at the dentist 🙁 and, 2) today is the Chili Dawg’s one month ampuversary!  I realized it today as we were on our way to my nephew’s birthday party.  One month, wow!  It has flown by and Chili has adapted so quickly and so well to life on three legs.  When we first made the decision to amputate, I wasn’t sure it was the right decision, but I just wanted him to be out of pain.  Now, I can see that it was clearly the right decision- to be greeted at the door with his golden smile and his Boxer brother behind him, to see his tail wagging and watch him run in the back yard pain free makes it all worth it.  Happy One Month Ampuversary, Chili Dawg!

Yesterday was a rough day.  My 2 year old faceplanted in the grass.  You would think landing on your face in the grass wouldn’t cause much harm.  Well, you thought wrong.  My husband took our daughter to the pediatric dentist who would have liked to have pulled Juliana’s VERY loose tooth right then and there, but due to my daughter’s heart defect and being unable to get hold of her cardiologist, they were sent home with a prescription for antibiotics and the order for me to call back to make her an appointment to get her tooth pulled.  Oy!  Needless to say our 2 year old was very crabby yesterday.

One of the highlights of our day yesterday was watching the Chili Dawg get back to his old self in the back yard, doing his “back dances”.  It’s nice to see him just living life 🙂